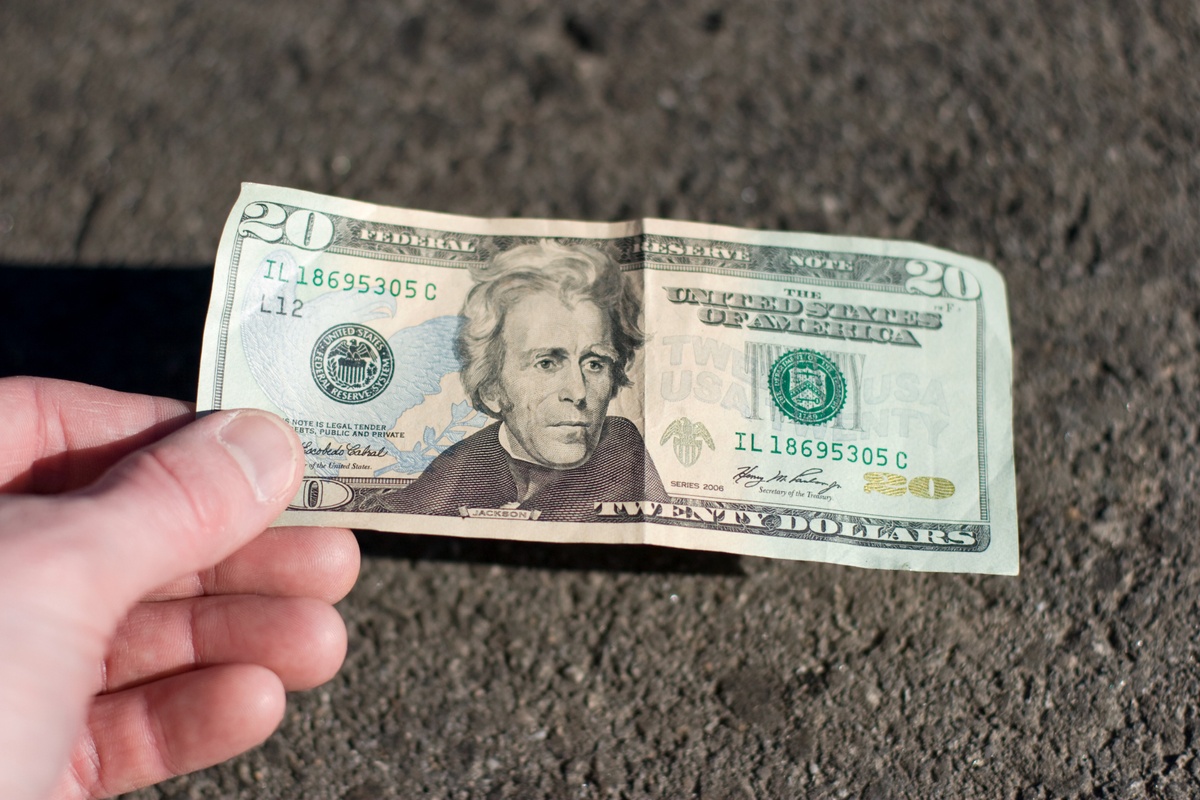 The Wooden Nickel: The Day I Became Rich

I remember like it was yesterday. It was 1976. I was old enough to be walking in a park by myself near my dad’s house, and young enough to only have a general idea of the significance of money. There it was, in the middle of the grass, like a pirate’s chest cracked open, its treasure spilled and nobody else in sight:

I had never seen so much wealth in one place!

I was raised to know that I should try to find the “owner” of the $20 bill, but it was obvious to me that it had fallen out of somebody’s pocket; nobody was going to claim it. Sure, I looked around for a few seconds, convinced this was a mirage, but what was I going to do…put an ad in the paper?

I had just won the lottery!

This was back when people still carried cash. These days, I have a $20 bill tucked into the back of my phone cover in case I come across some random roadside vegetable stand, but it’s likely I may never actually need to spend cash again. Now, when somebody offers to pay me back with cash, I look at them like they’ve just spit on me.

The park had bumper car rides for 25 cents, but nobody else was there to bump into me. The arcade next to the bumper cars was all pinball machines at a quarter for two plays (3 balls each!), so that could have kept me occupied for an hour (I was no pinball wizard). There was a world-famous custard stand down the street; I could have at least 15 servings!

I had never controlled so much wealth.

Of course, I couldn’t just walk around with a $20 bill; thieves would be on me any second. I would have had to break that twenty into change…how was that to be done?  I couldn’t very well go to a bank, even if I had known where to find one. I could have asked my dad for change, but then it would have generated all kinds of questions like “where did you get this?” or “did you look for the owner?” or “how much of this are you going to save?” I wanted to avoid all scrutiny with my new-found booty, so I had to carefully plan out how to cash in on my big score.

I started scheming. In 1976, there were no “video games” to buy, or I definitely would have blown it all on one. I could have saved the money, but that would have been really boring.  The “Sea Breeze” amusement park was within bike-riding distance, but I’d have had to take my brother and pay for his rides, too. This money was mine, and I didn’t want any freeloader using my hard-earned cash for his own enjoyment. Movies? I mean, Logan’s Run and The Bad News Bears were fine, but not worth MY money. (Little did I know that Star Wars was still a year away; I could have gone to see it over ten times with popcorn!) I could go to the corner store near my dad’s house and buy a mountain of candy, but I’m sure the store folks would have known that this $20 bill wasn’t really mine. What if they asked me how I got it?

This money was turning into a real dilemma. It was overwhelming!

As I sit here today, I really have no idea what I did with that money. I’m sure I blew it on something. Or I lost it. Or my brother found it and went to Sea Breeze without me.

It’s funny that I remember finding this mountainous sum of money – the feeling of elation it elicited- but have no memory of spending it.  I think that’s why we are so emotional when it comes to earning, investing, and spending money.  It’s the potential that it represents, and we become anxious and worried when we try to decide how to use it, save it, or just blow it.  We don’t want to make a mistake!  I’m sure I wasted the $20 on some combination of mindless entertainment and poor food choices.

So, what’s the lesson here? Maybe that sudden, unearned wealth may lead to poor choices? That the ‘70’s were a lousy time to be a kid with a $20 bill? That I would spend my entire professional career advising people to be smarter with their money than I was with my money at age 10?

Perhaps that $20 bill set me on a life path of thinking of money not as some life-altering substance that would make all my dreams come true. Maybe instead I learned that money is a tool to use and manage, but not worship.

Or maybe I just bought candy and called it a day. I probably decided to share it with my brother just to keep him quiet.